Thank you for your service

THANK YOU FOR YOUR SERVICE

Students and staff at Hanover Central schools took time on Friday and Monday to pay tribute to veterans. All four schools held programs honoring and thanking veterans for their service over the years. 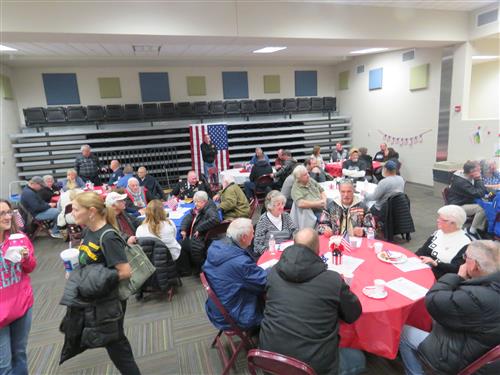 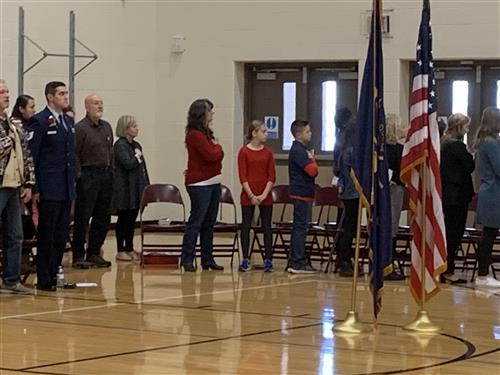 Guests stand for the National Anthem during the middle school program.

Hanover Central Middle School held its program Friday morning. Upon arriving the veterans were treated to a breakfast.  Then they went to the gym for the touching program. Boy Scout Troop #129 presented the colors. The Girl Scouts troop 30199 signed the Pledge of Allegiance as the guests, students and staff recited it. Principal Tom Martin welcomed everyone. All branches of the military and the Merchant Marines were honored. Technical Sergeant Keith Wuetig, United States Air Force Reserve, was the guest speaker. The winners of the essay contest read their entries: Kayla Bunge, Romelo Hill and Caroline  Donaldson. Daityn Altenburg was the winner of the poster contest. Each veteran introduced themselves, telling their branch of military that they served and who they were there for. Before  the program ended Mrs. Alison Rushing played Taps for the audience. 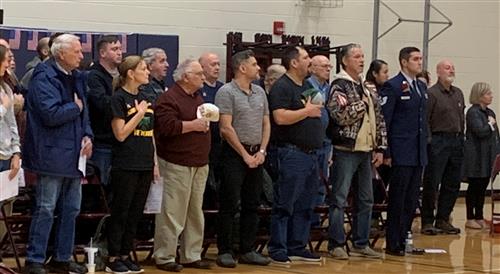 Pictured are some of the veterans at the middle school program. 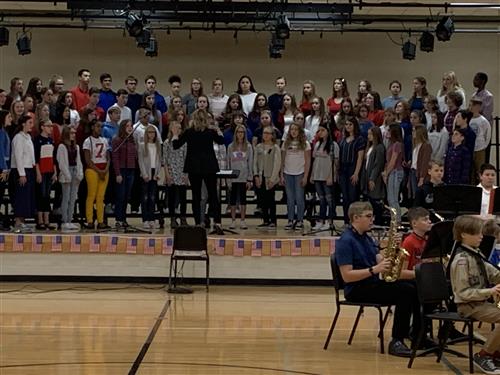 The middle school choir performs for the veterans. 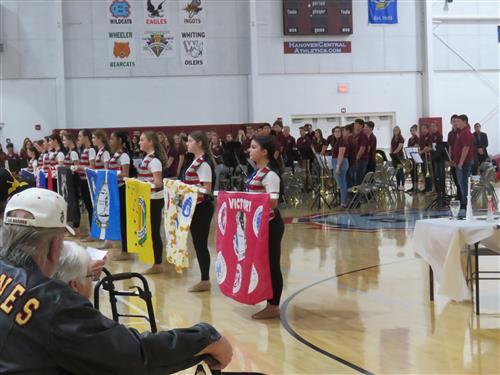 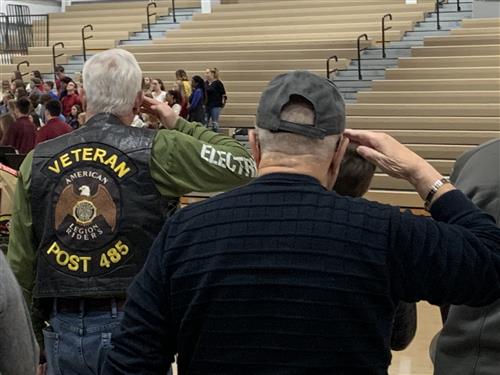 Representatives from American Legion Post 261 and the Auxiliary presented Principal Tami Kepshire with 55 flags for the classrooms. The Patriots Training Service dogs were on hand and the veterans introduced their furry friends to the student. A moving video tribute honored veterans who were relatives of the students. 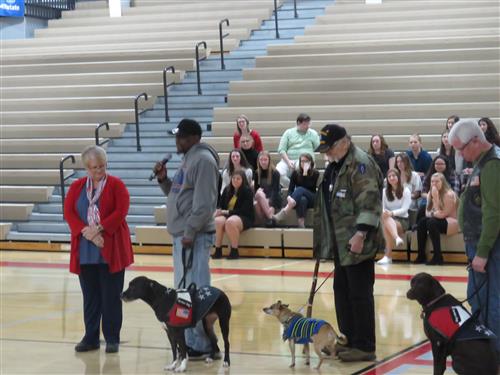 The Patriots Training Service dogs are introduced to the crowd during the high school Veterans Day program. 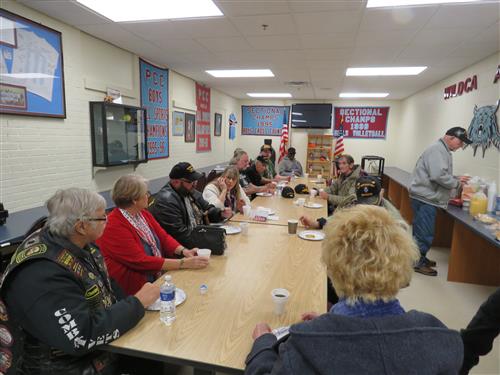 The veterans enjoy treats after the high school program.

Jane Ball’s program began with Boy Scout Troop 129 presenting the flag. The gym was decorated in red, white and blue. Students in the various grades performed a variety of patriot songs including  “When the Flag Goes by,” and “You’re a Grand  Old Flag.” Staff Sergeant Randy Leonhardt was the guest speaker and talked about his brother, Sergeant Brian Leonhardt, 21, of Merrillville, who died in Afghanistan in 2012 while serving our country. He was a member of the 713th Engineer Company the Indiana National Guard.  After the program a reception was held for the veterans and their guests. 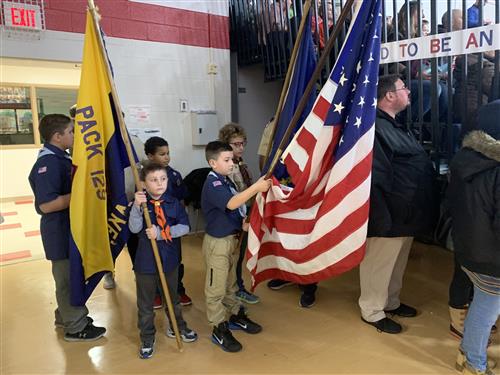 Boy Scout Pack 129 gets ready for the flag ceremony to open the Veterans Day program at Jane Ball Elementary. 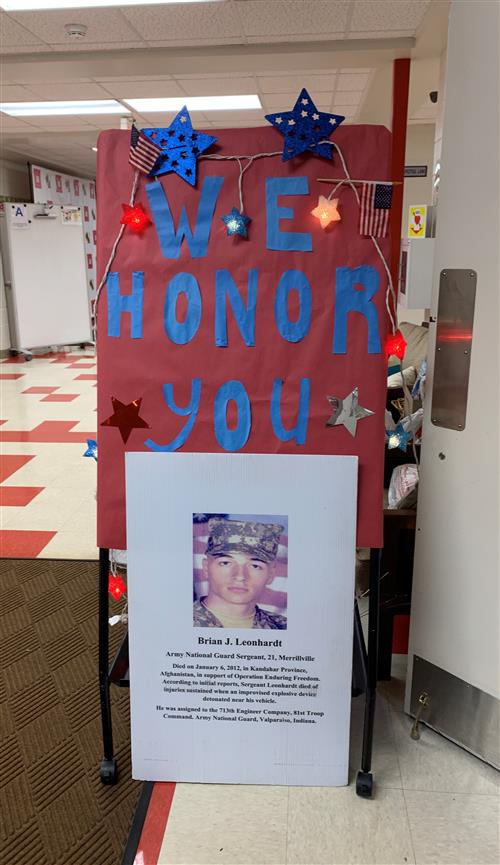 Sergeant Brian Leonhardt, 21, of Merrillville, died in Afghanistan in 2012. His brother spoke at the program. 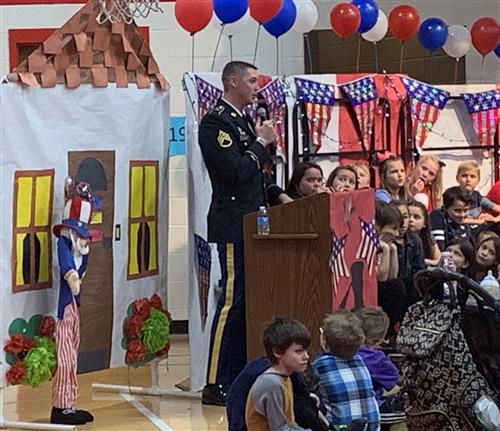 Staff Sergeant Randy Leonhardt was the guest speaker at Jane Ball Elementary and talked about his brother, Sergeant Brian Leonhardt, 21, who died in Afghanistan in 2012 while serving our country. 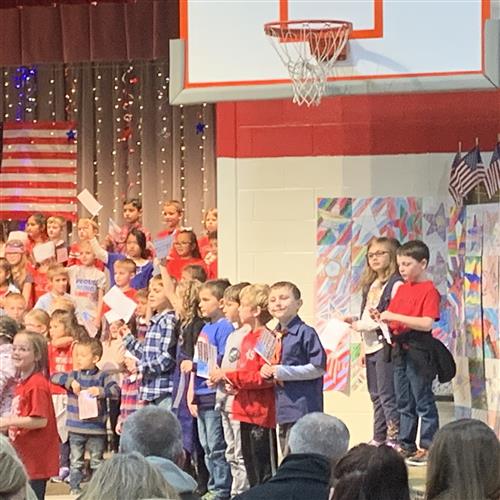 Students get ready to perform during the program at Jane Ball.

At Lincoln’s celebration, the Boy Scouts presented the flag and the Hanover Central High School brass quintet performed the Star Spangled Banner. The students sang a variety of songs including “Thankful for the USA” and “America the Beautiful. The Hero essay winners were announced: Regan Morgan , Ben Castillo, Kennedy Wilk and Hannah Vlasic. A very toughing video was presented called “Thank you veterans” with students thanking the veterans in  their own special way. 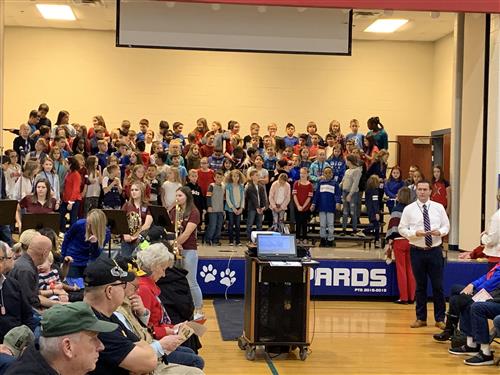 Principal Frank Zaremba gets ready to start the program at Lincoln Elementary.

Veterans check in with students before the start of the program at Lincoln Elementary.

“Kennedy Wilk wrote in her essay, A hero is someone who will help people no matter the cost and will make sacrifices for us. A veteran is a hero.” 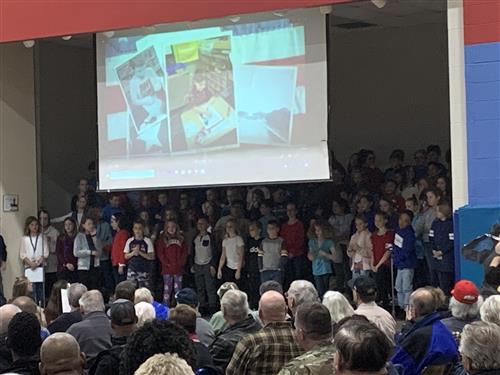 Veterans and guests watch the video the students at Lincoln made for them. 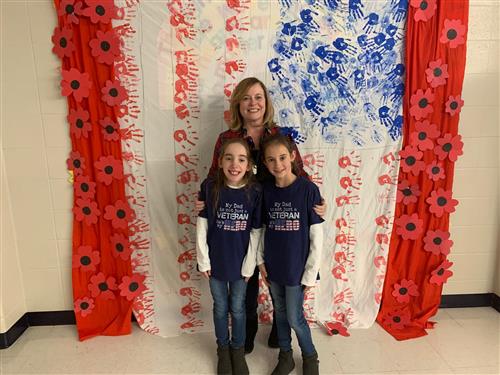 After the program guests were able to have photographs taken with the students.