A Ticket to the Titanic

It’s hard for fourth grade students to truly understand the enormity of the Titanic tragedy, unless of course they are students in Breann Buchholz class.  Her students were called upon to portray both survivors of the historic steamship that sank on April 15, 1912 and the reporters that met them upon their arrival in New York three days later on April 18, 1912.

After learning about the Titanic, the loss of 1,517 lives and the 706 survivors Ms. Buchholz class embarked on a very unique writing assignment.  Students dressed up to emulate the era of the ship’s sinking and took turns acting as survivors of the Titanic and the reporters who might have interviewed them following their return.  Ultimately each student was tasked with creating the front page of a newspaper and writing about the survivors, using their interview notes and other information they learned about the famous and ill fated journey of the cruise liner.

Danny Kowalski is dress the part of a Titanic survivor in suspenders and staw boater. 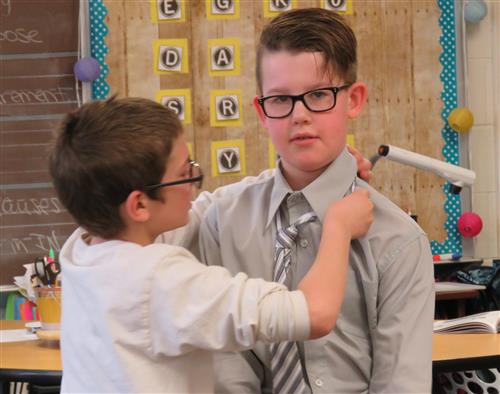 Lucas Toigo helps Tyler Dewar don garb reminiscent of a first class passenger on the Titanic or a reporter ready to talk to a survivor.

While it’s a bit difficult to keep 4th graders in a somber state of mind, Mrs. Buchholz reminded each group of reporters just how traumatic the event was.

Students gathered with solemn faces to depict traumatized survivors of the Titanic.

She told the reporters; “I want to thank you so much for waiting so patiently here on the pier.  The Carpathia has docked and I have been told that the Titanic passengers will be disembarking very soon.  I know many of you have traveled many miles and are here to get the interview that will make you famous.  I wish you luck, but please remember the people on the other side of this door have just been through the biggest disaster of their lives.  Two days ago in the North Atlantic, right before their very eyes, they watched their husbands, their sons, their daughters and relatives perish.  I beg you to treat them kindly.  Be gentle with your approach and ask their permission to be interviewed and please introduce yourself first.”

Ms. Buchholz then talked to survivors and told them the reporters and the world wanted to hear their stories.  She asked them to try and remember as many of the details of their ordeal as they could.

Mrs. Buchholz talks to survivors of the Titanic tragedy, just before they meet with reporters in the classroom.

With their roles set, the survivors and reporters met.

Titanic Survivor, Mrs. Stanton Abbott (Francesca Perez), with smudges of dirt still on her face, met reporter Rene Abbot.  Mrs. Abbott’s answers to the reporter’s questions were both detailed and heart wrenching.  A third class passenger, Mrs. Abbott was aboard the Titanic with her two sons, enroute to their home in Providence, Rhode Island.  Francesca Perez did an excellent job of expressing her sorrow and horror at the loss of her two boys.  “I wasn’t worried about myself, just about my two boys,” she said.  “I didn’t notice any water coming in or that there was anything wrong until I heard the alarm and the screaming started,” explained Mrs. Abbott.

First class passenger and survivor Mrs. Emma Bucknell, portrayed by Emma Lewter and interviewed by Xavier Vallejo was a little less introspective about her recollections, perhaps a bit too traumatized to articulate what she really felt.  When asked what she thought when the boat stopped, all Mrs. Bucknell could say was; “I thought it ran out of gas.”  Her feelings about the loss of her husband were virtually whispered as she told the reporter that she is; “sad and lonely.” 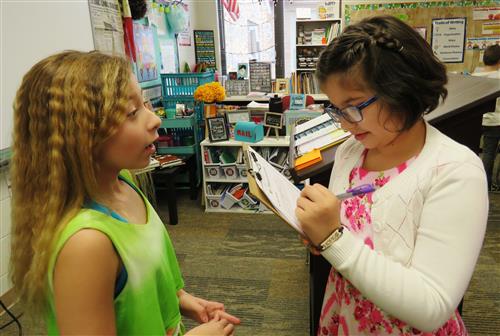 All around the classroom interviews took place.  Above are River Dixon-Ortiz and Sophia Hillebold. 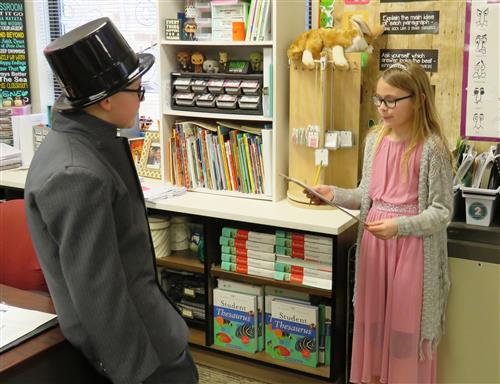 A dandy dressed Tyler Dewar is interviewed by Katelynn Elder

Following the interviews, students were given instructions about how to construct the front page of their newspaper.  Examples of period newspapers were available for students to look at for formatting.  Each student received two photos and a large sheet of newsprint to create their paper.  “You will need to write a huge headline that will make people want to read your stories.  You will need to write in columns and place your pictures on the page.  Only a part of your page will be your interview,” said Ms. Buchholz.  “You will also need to write other stories, perhaps about the ship, about the menu, anything you want to write about that you have learned about the Titanic,” she added.

Ms. Buchholz explains what the requirements are for the student newspapers describing the sinking of the Titanic and interviews with survivors.

At the end of the project on Friday, April 20th, the students will either be “hired” or “fired” by their respective newspapers and assigned a writing grade.  We can’t wait to see what these students do with this creative assignment, but we’re sure they will always remember their ticket to the Titanic.