As the end of the school year approaches each year, exciting and important events happen almost every day.  One of those events is the National Honor Society Banquet.

The Hanover Central High School National Honor Society is not only a nationally recognized organization established to recognize outstanding high school students.  It is a close knit family at Hanover Central High School.  Juniors and Seniors who meet stringent membership qualifications and an intense selection process  every fall, are not just a collection of honor roll students, but a cohesive group that works together to serve others.  They are in short, very ‘honorable’ kids.

Teacher, Steven Gustas has sponsored the Society for the past eight years, and was joined last year by co-sponsor, Guidance Counselor Monica Kazda.   The 2016-2017 academic year marked the final year Mr. Gustas will serve as sponsor.  It was an event noted by this year’s graduating seniors at the annual NHS Banquet held on May 24th. 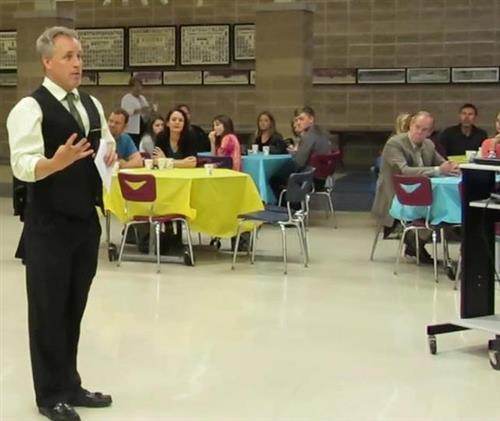 Steve Gustas, National Honor Society Sponsor, welcomes guests to the annual banquet and explains how important it is to recognize the members of the Society.

After sharing a meal with family, friends and fellow Honor Society members, a PowerPoint presentation designed by Allyson Tufts and narrated by Victoria Rico outlined the community services efforts of  Society members.   You can view the presentation below…

Officers also presented Co-Sponsor Monica Kazda with a token of their appreciation and offered a parting gift to Mr. Gustas.  He was also given a chance to break open his very own piñata as NHS members and guests chuckled at his attempts.  Ultimately, Mr. Gustas was able to break open the piñata and found his favorite candy inside, Brach’s Maple Nut Goodies. 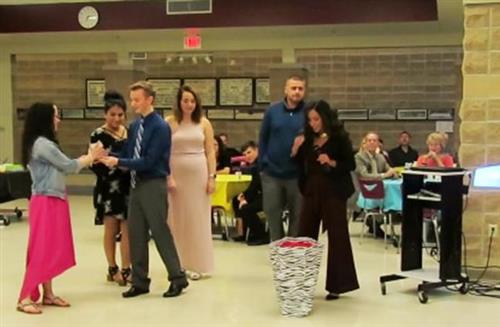 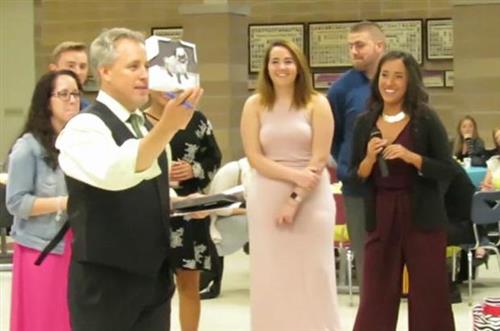 NHS Sponsor, Steve Gustas receives a picture of his dog Willy and a gift certificate to Willy's veternarian  from Officers of the National Honor Society as a parting gift for his years of service as NHS Sponsor.
To finish out the exciting and memorable evening, Senior National Honor Society Members received the tassels they would wear on their graduation caps signifying their membership.  You can view a distribution of the tassels below.

The following individuals were 2017 graduating members of the National Honor Society: