Wrapping Up a Phenomenal Year on Stage

With every passing year, the productions of the Hanover Central Thespian Society get more ambitious and more exciting.

During the 2017-2018 academic year, Society members and Director, Steve Gustas left audiences in awe following the spring production of Agatha Christie’s “The Secret Society.”  In addition to the main production, students also participated in their own production of “Help Wanted,” directed by Senior, Michael Karpik.  If that wasn’t enough of a challenge for the students, there were an additional 6 micro-plays addressing the issue of bullying.  Those plays were directed by:  Michael Karpik, Anna Zurisk, Nerissa Fezler, Ashley Owen, Lynda Hinojosa and Simone Wydra.  Was that enough?  No, not for this talented crop of thespians.  Just a few weeks prior to their fall production, they were approached by Lake County Parks Department and Volunteer Coordinator, Dawn Robertson to fill in a gap left by another school.  The students participated in an audience participation/murder mystery play entitled, “My Alma Martyr.”   The dinner is an annual thank you to 100+ park volunteers.

Jessica Wiersma and Noah McWilliams in "The Secret Adversary."

With those events stoically completed, the Thespian Society members began, almost immediately, to prepare for their February production of “Chitty Chitty Bang Bang.”  The lively musical included, not one, not two, but three full reproductions of the legendary car at the heart of the story.  It still was not enough for our intrepid performers and crew.  During the final performance, members of the society raced through the audience and collected spare change and donations to provide the first ever, Thespian Society Scholarships for graduating seniors, many of whom have participated in numerous productions and made the Society the heart of their Hanover family for four years. 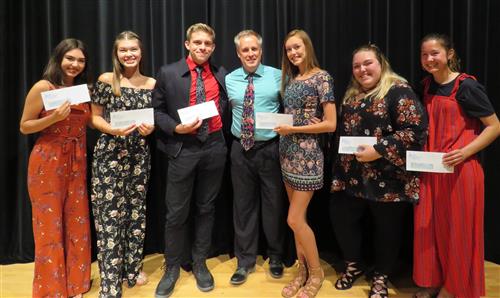 The Hanover Central Thespian Society capped off the year with the 4th annual Triple AAA (Applause, Applause, Applause) Awards during the final week of school.  Following a tradition set the last several years, Society members were met on the red carpet by ‘Nancy O’Dell,’ a.k.a. Michelle Duffy, to answer questions about the awards, their favorite performances, and the all important questions about their designer outfits for the evening.  During the Triple AAA party, awards are given and Society officers for next year elected.

The Red Carpet goes down for the Triple AAA Awards

Anna Zurisk and Nerissa Fezler at the Triple AAA Awards

This year’s recognized performers were: